In the cultivation of cultivated mushrooms, there are 3 species that cause damage as mushroom flies in our country as well as all over the world. These are Lycoriella castanecens from the Sciaridae family, Megaselia halterata from the Phoriade family, and Hetropeza pygmaea from the Cecidae family.

Mushroom flies can cause damage in production in different ways and in different periods. In particular, fly larvae eat the mycelium in the compost during mycelial development and cause serious losses to the mycelial growth in the mushroom compost. Adult flies, on the other hand, can damage the formations of the fungal stubs, as well as enter into the formed galleries and form galleries here. Mushroom flies have another form of damage to the cultivated fungus other than the above-mentioned damages. This is the spread of a possible disease in the production room, inside or outside the room, within the facility. This is indisputably the greatest form of damage (Bora, T., Toros, S. and Özaktan H., 2004).

The activation of Sciarids in mushroom growing enterprises begins with their attraction by the fermentation odors released during the ventilation required for cooling the compost. This odor causes flies to enter production rooms through doorways, ventilation gaps or directly through doors during cultural processes. The eggs hatch in 6 days, depending on the ambient temperature, for example at 18ºC. The emerging larvae feed on compost and developing fungal mycelium. The larvae that develop within 3-4 weeks become pupae. The pupal period is 18 days at 18ºC. Adults emerging from the pupa mate after a short time and start laying eggs 2-3 days later. (Bora, T. et al. 2004)

Megaselia halterata (Phoridae): Also called humpback flies. Matures typically show retrograde motion. The times of emergence are spring and summer months. It shows another typical feature by clustering on the edges of the case and pillow, lamp and door entrances. Mature females lay eggs in compost. Larvae emerge after 2 days at 24ºC and become pap in 4-5 days. It takes the form of an adult fly in 7-8 days. In culture rooms, larvae emerge easily from eggs at 16-17ºC. It feeds on myceliums and fungi within 14 days of turning into paps. After 4 weeks, new mature flies are formed. Mosquitoes, which are harmful in mushroom production, belong to the families Sclaridae and Cecidomydiae.

Hetropeza pygmaea (Cecidae): Cecid larvae tend towards light. Since many periods seen in the life table showing normal reproduction have disappeared, rapid reproduction occurs with this type of reproduction, and 18,000 individuals can develop in a handful of cover soil. 500,000 larvae can be seen in the compost in a cultivation area of ​​0.1 m2.

Cecid larvae feed on mycelium both on cultivated mushrooms and on edible mushrooms growing in nature. Larval excrement inhibits mycelial growth. The larvae, which pierce the hyphae walls of the fungal mycelia with a 5 mm mouth piece and suck the cell contents, break the hyphae with strong head movements as they get bigger and their nutritional requirements increase and take the cell contents that come out. In an environment where they are very dense, they can feed on voracious animals, prevent the formation of caps significantly, and cause damage to the stem part of the fungus. 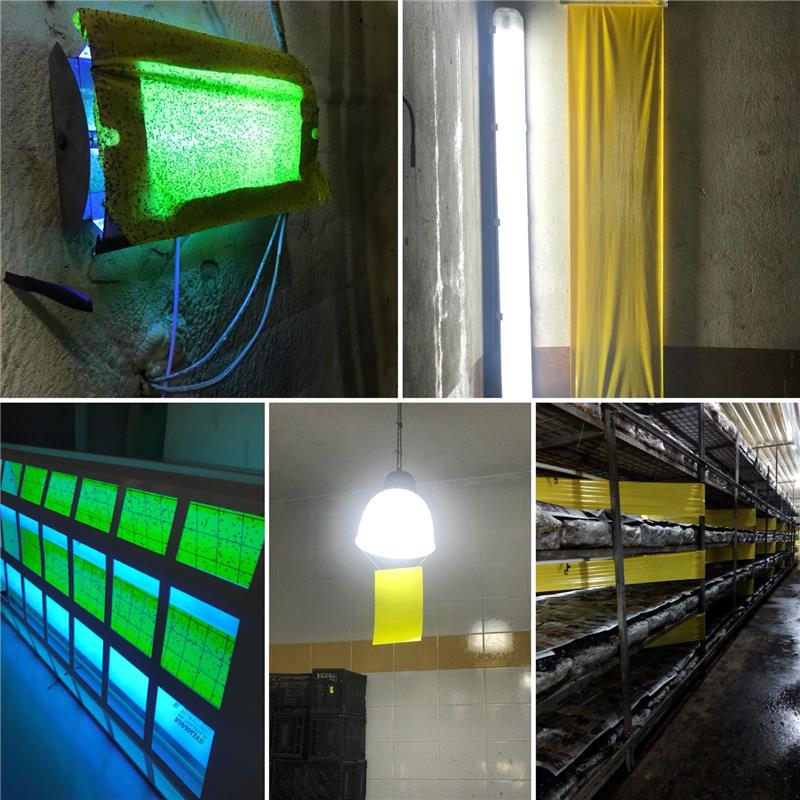