Beginning from the beginning of July, it can cause significant damages throughout the summer, starting with the Gemlik and Manzanilla varieties for pickling and the Ayvalık olive variety for oil.

In the larval stage of the olive fly, it causes damage to the fruit flesh. During development, the larva feeds by opening galleries around the nucleus. Thus, it causes the fruits to rot and fall, the amount of olive oil to decrease and the acidity of the oil to increase. Especially in table olives, the damage is of greater importance.

A drop-shaped black spot on its bright reddish yellow head,

It has a black coloration in the mid-dorsal region of the red yellow chest.

It also bears 4 matte gray longitudinal lines and also a rust-brown transverse stripe in front of the yellow light scales.

In females, the abdomen is wide and there is an egg-laying needle at the end.

It pierces the olives with its egg-laying tube and lays eggs under the fruit skin.

•The larva is legless and transparent, white in color.

•The head is thin, the body thickens backwards. It has a conical cylindrical appearance.

LIVES OF THE OLIVE FLY

It spends the winter mostly in the pupal stage at a depth of 2-5 cm in the soil or as an adult in olive groves and heaths.

Overwintering adults feed on sugary and sweet secretions of crustaceans and aphids, fruit pulp, sugary substances such as honey, streams of elm, sycamore and olive trees, and flower nectar.

Adults begin to emerge from the soil after the soil temperature reaches 10 C, rarely at the beginning of April, generally from June.

To reach egg laying maturity, they feed on sweet substances around for a while.

Females mating at the end of June, when the fruits begin to become suitable for laying eggs, primarily prefer large, shiny and oily olive fruits.

• It lays its spindle-shaped egg 0.5-1 mm deep into the fruit, in the V-shaped slit it has opened with the egg-laying tube.

•A female can lay only one egg per olive fruit.

• In places and years where the density is high, 7-9 eggs can be laid on an olive fruit by different females.

• The place where the egg is laid in the fruit turns dark brown after a day, this is called “HIT”.

•The opening time of the egg placed in olive fruit is 2 days at 18°C in summer.

•This period extends to 6-10 days in autumn.

•The opening time of the egg placed in olive fruit is 2 days at 18°C in summer. This period extends to 6-10 days in autumn.

•The mature larva prepares a room for itself before it becomes a pupa and opens an exit hole for itself by gnawing and thinning the fruit membrane.

For monitor purposes; In order to detect and monitor the pest, at the beginning of the production period, traps are hung on each olive field with at least 1-2 traps per hectare. Insects caught in the traps in certain periods are counted and information about the adult flight activity and density of the pest is provided. Based on this information, appropriate fighting methods and time are determined.

It is used with a plastic bag containing pheromone and attractant and a 25x40 cm yellow sticky trap. The trap is hung on the side branches of the plant at a height of 150 cm from the ground. The adhesive plate is replaced if it becomes dirty or covered with insects. The duration of action of the pheromone and attractant is 4-6 weeks, depending on the temperature conditions.

Deep plowing of the soil in winter to destroy pupae.

Olives with worms should be collected and removed from the olive grove every 3-4 days during the damage period.

Olives with worms should be collected and removed from the olive grove every 3-4 days during the damage period.

Also, early harvest should be done in order to prevent the intense damage of olive fly in autumn. 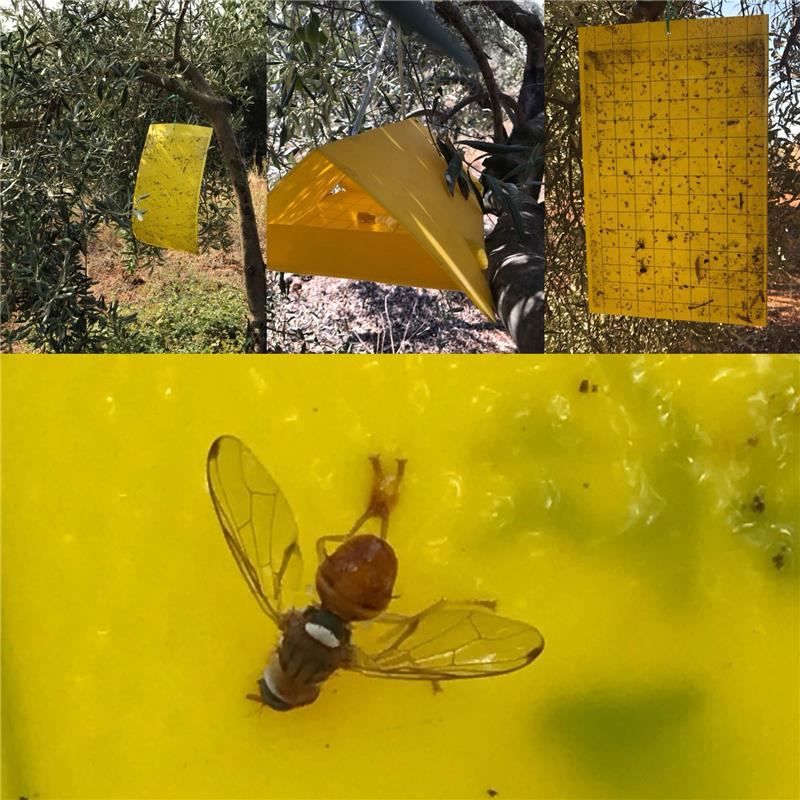